On the morning of September 24th, 2020, a C&S boxcar finally came home!  She arrived in Como.  Here is the writeup written by Jason Midyette:

"Colorado & Southern 8179 was a "Miller Car" that went to the RGS in 1938 and stayed on to the end of operations. The RGS made the car into an outfit car and used it until the end, when it was scrapped. The carbody ended up in Olathe, where it spent nearly 70 years as a shed. The car was acquired by the South Park Rail Society last year. We moved it from Olathe yesterday and unloaded it in Como this morning."

Posted by Denver at 5:15 PM No comments:

Hear the man who piloted the last rotary through Alpine Tunnel

I came across an amazing gem via the Colorado Railroad Museum website.

On April 21, 1958, Mac Poor, famed author of DSP&P and co-author of the Pictorial Supplement to the DSP&P, recorded the audio of an interview between himself and George Champion, the man who piloted the final rotary snowplow through Alpine Tunnel.  This journey occurred between December 31, 1909 and January 4, 1910.

It is stunning to hear from a man who was there along with hearing Poor's voice as the two record this historical memory for posterity.

Posted by Denver at 1:17 PM No comments:

In 1992 my parents took me and my brother to the east portal of Alpine Tunnel for the first time.

We lugged our Panasonic VHS-C camcorder up to the tunnel entrance and I took some video of the tip of the portal's redwood frame.  One could still see into the top a short bit, though most was filled with rockfall.  Sadly, this is now forever lost from view as the remains of the face of east portal collapsed some time later.

The final portion of the video shows us driving our rental car over the former South Park railroad bridge at Romley several miles below the townsite of Hancock, east of the tunnel.  At a later date the road was diverted around the bridge, as it is today, so you can no longer drive over it.

I just purchased Bob Richardson's autobiography, Chasing Trains.  Richardson, who co-founded the Colorado Railroad Museum, has a number of C&S tidbits that I didn't know about.  Below is one of them.

The modelers at Boulder, Colorado, who maintained Engine 74 in the city park there, loaned us the so-called "bear-trap" cinder catcher they had built from Colorado & Southern patterns for that 2-8-0.

So, in April of 1987, on the occasion of the final-runs anniversary on the South Park line, we operated No. 346 with our single ex-C&S stock car and the little four-wheel C&S way-car (caboose).

It made an unusual and authentic 50th anniversary train, for in 1937, Engine 346 had been on loan to the C&S, and she handled the last livestock train on the South Park--into Jefferson.  The engine has a steel cab instead of the original wooden one, a result of a wreck on the C&S at Kenosha Pass in 1936.

After the last stock train in 1937, there was a mix-up, and the crew put No. 346 into the Como roundhouse and dumped the fire.  Then, the crew got an automobile ride back to Denver.  The men were supposed to have run the 2-8-0 back to Denver, so the engine could be loaded onto a flatcar and sent back to the D&RGW.  As a result, a crew had to be taken back to Como, where No. 346 was fired up, and the men ran the engine light to Denver.
Posted by Denver at 3:40 AM No comments:

Rocky Mountain Railroad Club to ride the Loop in 1938...almost

While I've long heard of the Rocky Mountain Railroad Club (RMRRC), I largely associated it with excursions on the Rio Grande Southern and the Denver & Rio Grande Western narrow gauge in their twilight years. 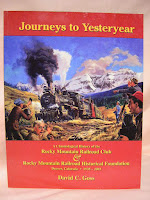 In research that I've been doing about the C&S narrow gauge in the post-abandonment years I am surprised just how much the RMRRC has come up and how important a role it played in saving or recording parts of the C&S in many cases, not the least of which was their support to help Mac Poor publish his Denver, South Park & Pacific book when the previous rail society who had planned to publish it refused to do so without massive cuts.

In the process of tracking down more details about the history of the RMRRC, I contacted them via their website.  A member responded and recommended that I get a copy of Journeys to Yesteryear by David C. Goss that chronicles the group's activities from 1938 to 2003.  It is a delightful book especially as it describes every excursion from the group's start to 2003 when the book was written. 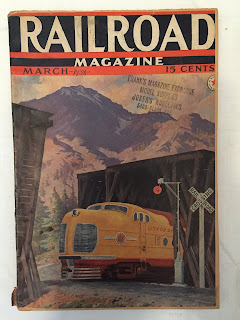 A curious C&S-related detail popped up in the very first page of the major Club events.  Quoting from the March 1938 issue of Railroad Magazine Carl Hewett wrote "I want to hear from persons interested in forming a rail fan group in Colorado, especially around Denver.  Also, I'd like to organize a narrow gauge fan trip over the famous Georgetown Loop."


On March 30th of that year, the Club had its first meeting "in the basement of the Union Pacific Freight House with approximately 20 charter members present."

In the course of research for the book the author came upon a short letter with no date, but likely 1938, and possibly written by Carl Hewett, when he mentions two trips the group planned to take that year.  The first was to Cheyenne where they hoped to visit the Union Pacific facilities, but this trip never occurred.  The second planned trip was to the Georgetown Loop.

The C&S was already in the midst of abandonment procedures for the line from Idaho Springs to Silver Plume at the time.  The ICC had given permission to junk the line starting May 30, 1937, but due to upheaval from those protesting the C&S plan, the case reopened and the date was pushed back to January 31, 1938.  More back and forth went on and the date was moved to December 31, 1938.  Then, the date was again changed and all was to be revisited on January 31, 1939.  This final date secured permission to abandon and the track was taken up a few months later. 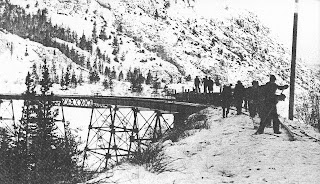 In the midst of all this, the Club had a short window to ride the Loop.  However, in the end, Goss writes, "This trip was not operated either and the Colorado & Southern abandoned this route less than a year later removing the rails."  When one thinks of the iconic images and videos taken of other RMRRC excursions on dying narrow gauge routes like the Rio Grande Southern and the D&RGW, it's sad to think the Club came so close to capturing similar final moments of the Loop just before she was lost.

I put together a video with a focus on the telegraph office/station and two-story boarding house at the West Portal of Alpine Tunnel.  The video shows the changes over the years from operation to abandonment and decay to restoration.

I also show the inside of the present restored telegraph office.

My footage comes from our 2018 trip to the tunnel.  We rented ATVs, but due to the closure of the right-of-way just past Sherrod Loop we had to walk to the station complex.  We headed up grade for quite a while.  At one point, though, because we had a time limit on our ATV rental, I figured there was no way we could all reach the tunnel in time.  I decided to turn around, but my 10 year old egged me on to have the two of us give it a try.  So we left the rest of the family a little past the Palisades and hustled in the thin mountain air.  We never made it to the tunnel itself, but did get to the station area.  I'm thankful for my adventurous daughter who pushed me on! 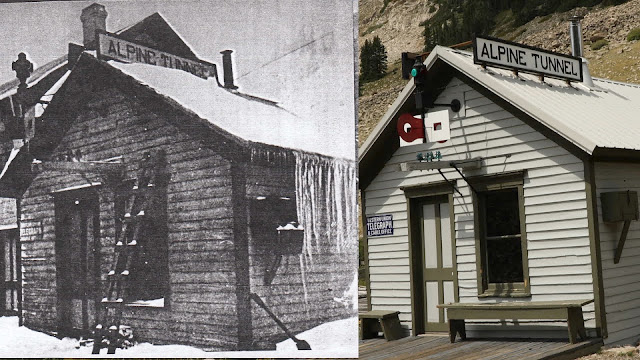 Posted by Denver at 6:12 AM No comments:

When I posted a video of the Alpine Tunnel engine house I included some drone footage filmed by David Moore who graciously allowed me to use the remaining footage that he had not already posted.  Many enjoyed the footage and at least one person asked if Dave had flown his drone over the pass from West Portal to East Portal.  Indeed he had.

This video includes the footage from that segment.  I included a few titles to designate important points of interest (such as the summit of the pass, Mount Poor, and various railroad remains) and put a couple before and after shots of the line during operation.

Posted by Denver at 1:35 PM No comments: