The video below is another fantastic film from "Then and Now Colorado."  There are five then and now shots related to the South Park Line in here.  They are listed here:

Posted by Denver at 6:34 PM No comments:

The Argo Mill and Tunnel have a curious future!

If there is a non-railroad, non-natural, iconic structure along the Clear Creek line it has to be the Argo Mill.  The looming Idaho Springs structures with its name blazoned across them have stood as a defining feature for over a century, 125 years to be exact.

I recall being able to tour inside of the mill many years ago, but not the Argo Tunnel itself.  That changed in May of 2017.  For the first time in 75 years the tunnel was again open for visitors.  Shotcrete Technologies founder Mary Jane Loevlie, along with several other investors, purchased the Argo Gold Mine and Mill in 2016 with the intention of making it an "economic engine" for Idaho Springs.

But it doesn't stop there.  There are ambitious...very ambitious plans in store for the Argo Mill.  The Denver Post states, "Their plan is audacious. A 160-room luxury hotel and convention center discretely built into Rose Gulch and flanked by a dozen cabins abutting 400 acres of trailed open space. Don’t think wood-and-stone mountain lodge. Think steampunk, a mix of Victorian and industrial designs heavy on the glass, steel and concrete. 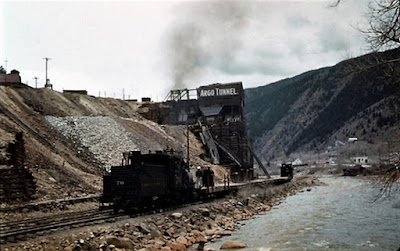 "There’s a funicular or tram to ferry tourists to tunnel tours and the hotel. A pedestrian-friendly village, accessed by a bridge over Clear Creek, will step up the hill, with a park, retail and a destination-type restaurant. Single-family homes will anchor the east side. A terraced collection of smaller, 750-square-foot houses, to the west, above the mill, could help shelter local workers."

Those are some serious ambitions!  If it works, hopefully, all that tourism will continue to boost the Georgtown Loop's ridership.  Maybe it will even give Idaho Springs and the C&S Railway Society a possible location for getting no. 60 up and running!  Just dreaming...

"How Idaho Springs plans to turn the Argo Mine Superfund site into a tourist attraction" by Jason Blevins.  The Denver Post. 16 May 2017.

Posted by Denver at 3:15 PM No comments:

Why they never had to re-lay track at Leadville

So, why didn’t the Leadville, Colorado and Southern have to lay any track?  There’s a curious little story about that.

There was enough traffic from the Climax Molybdenum mine that, while the rest of the narrow gauge was gone by 1941, the isolated Climax to Leadville line was standard gauged in 1943.  This kept the line running for almost four decades longer despite its only connection with the outside world being via the Rio Grande connection in Leadville.

In 1981, Amax, the owner of the Molybdenum mine, closed it down.  By this point the Burlington Northern had fully absorbed the C&S.  BN then listed the Climax-Leadville line as abandoned, but never requested authorization to pull up the rails.  The reason for this is that Pat Wadsworth, Amax’s public relations director said, “‘Even if the mine wasn’t running we still wanted the railroad connection.”  The mine did reopen here and there post-1981 and,
possibly, the company didn’t want to lose its connection in case things ramped up again.  He apparently put some pressure on the Burlington Northern to keep the line.  Wadsworth stated, “‘We made it clear that we could move a lot of that traffic [significant coal traffic that Amax currently shipped elsewhere via the BN] to other railroads if the Burlington really tried to abandon the Climax line.’”

In the words of Ed Quillen in Colorado Central Magazine, “that threat from Amax-which could mean years of expensive litigation for the Burlington, as well as the loss of a good customer-probably explains why the Burlington was willing to offer one hell of a bargain in 1988 [other sources say December 1987].”

This bargain was as follows: For $10, you could have “a dozen miles of track, along with two diesel locomotives, various cars and cabooses and maintenance equipment, and the roundhouse” as long as you promised to keep the line operable.

After five brief months of rebuilding several freight cars to carry tourists and renovating the old, brick Leadville depot, they began running the Leadville, Colorado & Southern on Memorial Day of 1988.  According to Stephanie Olsen this name was chosen “‘because everybody here called it the Colorado & Southern.  We couldn’t use that name, and we did want Leadville in the name.’”

Ownership of the LC&S has since been passed down to the Olsen's children: Derrick Olsen and Kirstin (Olsen) Ayers and her husband Steven.

The line still runs today from May to October taking passengers on a 2 1/2 hour trip from Leadville to close to Climax and back.

"The Leadville Train: Sit Back and Enjoy the Fall Colors" by Kathy Bedell.  Leadville Today.  12 September 2014. 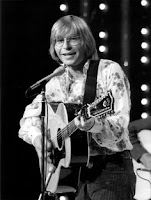 In 1972, the song that would later become the state song of Colorado, hit the airwaves. John Denver’s “Rocky Mountain High” was a biographical tune containing the lines, “He left yesterday behind him; you might say he was born again.”

Denver’s reference to “born again” was a tip of the hat to what came to be called the Jesus Movement, a generation of young, often long-haired hippies who eschewed both the sex and drugs culture of the 60s and 70s as well as the stodgy nominal church life of many of their parents. Instead, they discovered that to follow Jesus was a radical new life, akin to begin “born again,” a phrase Jesus Himself used when he explained to a seeker that eternal life is life that begins not in Heaven, but now, at the point of following Him.

On this Easter Sunday, when many of us celebrate that Jesus conquered death, making a way for us to be “born again,” it is a delight to see a symbol of this new life in a tiny railroad that has been experiencing rebirths lately. It might be a stretch to call it a symbol, but I’d like to believe the Lord looks kindly on a our meager attempts to resurrect that which was lost.

There have been so many rebirths in the C&S world this past year, but the one that I want to focus on this Easter is C&S caboose 1006, proudly being born again thanks to the C&S Railway Society. They hope that this year the resurrection will be complete.

The society sent me an update on the status of 1006 and their vision for 2018. While completion within the year is the goal, they understandably state, “but with all projects of this nature, it’ll be done when it’s done.” The focus right now is on frame assembly. With all the components of the frame present in Silver Plume, the society is “drilling out the tongue and groove for the frame members to go together.” After the frame is put together the plan is to use a Georgetown Loop forklift, operated by Jeff Badger, who volunteered, “and lift the original body from the frame. After that it will be a matter of replacing individual pieces of the body frame and re-siding the caboose.” 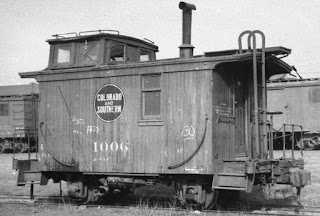 One hope that the society has is to acquire a grant from the Denver Garden Railway Society. In January the C&S Ry. Society made a presentation to them of the 1006 project. If this grant goes through it will “practically bring the project to completion.”

Thankfully, 1006 was rescued way back in 1941 and has repeatedly been saved from neglect and the elements over the years. 2018, however, with this most extensive of restorations on the tiny bobber, may truly be the year of the born again 1006.

Happy Easter! He is risen!

Posted by Denver at 4:56 AM No comments: