Dreams fulfilled and dreams forgotten for the West Portal 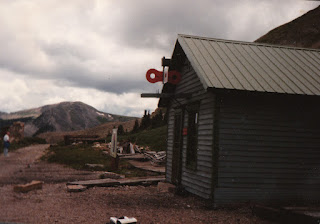 Alpine Tunnel and the subsequent several miles of railroad grade down the west slope.

It was fun to find the following article from Colorado Central Magazine chronicling the ambitious plans that were just beginning over 20 years ago now.  I am so grateful for the many of them that came to fruition.  This article brings one sadness though: the failure of a plan to open a portion of the tunnel for visitors to see.  I can only imagine the challenges that this plan would have presented and it surprises me that it even was considered.  Still, it would have been thrilling!

There was another plan that I was not aware ever existed: to rebuild the boarding house.  That would have been a sight to see!

Still, it's a pleasure to walk down memory lane and see what was afoot in the mid-1990s.


West Portal of Alpine Tunnel getting a facelift

Transportation History – July 1994 – Colorado Central Magazine
At a little more than 11,500 feet above the tides, a small wooden building leans into whistling tundra wind. Abandoned for many years and left as a makeshift home to marmots and other mountaintop squatters, the little depot still shares the snow-patched landscape with the remains of the colossal Alpine Tunnel project that began 115 years ago.

After its closure in 1910 by the Colorado & Southern Railroad (a corporate descendant of the Denver, South Park & Pacific), it remained relatively undisturbed except by the few adventurers and relic-hunters who braved the old railroad bed to timberline.

Then, in the 1960s, the historic tunnel captured the attention of a Pitkin summer resident. Francis Trudgeon, originally from Denver, set up the first road signs outside Pitkin to direct visitors driving to the tunnel. His enthusiasm spread to the U.S. Forest Service, and plans to restore the site slowly took shape over the next 30 years.

Ray Rossman, Gunnison zone heritage manager and archæologist for the Forest Service, has directed that project for the past two years. The plans include opening the tunnel’s west portal, providing a full-time summer guide, replacing narrow gauge tracks and reerecting several of the old buildings. According to the agenda, those plans are operating at full steam.

Last summer, Rossman worked closely with the Mile High Jeep Club from the Denver area whose members restored the 1890 depot and telegraph station as well as a railside water tower. While other volunteers removed some of the debris from the tunnel’s entrance, out-of-state visitors often offered to pick up a shovel and help.

Although most of the work requires only a willing back, parts of the project need the expertise of professionals. Sometime in the coming weeks, a team from Texas A&M University will assess the site and develop a master plan for renovation through digitized computer graphics. Rossman hopes to restore chosen buildings to their original 1910 style and appearance.

Besides the already finished depot, he would also like to see the two-story boarding house reconstructed within the next few years. Rossman said it may be the wildest plan in the whole project — the original boarding house collapsed in 1959 and now rests in a scattered heap next to the depot.
A plan that isn’t so far off is relaying track in front of the depot with authentic rails. So far, Rossman has collected old rails from another narrow-gauge site, and has purchased newer ties that workers will cut to the standard narrow gauge dimensions.

Since the Forest Service intends to focus on the tunnel’s historic significance, Rossman has taken steps to secure a full-time summer guide to educate the public when the road opens in mid-June.

“We’ve hired a full-time seasonal guide starting this mid-June,” he said. “She and two volunteers — one from Arizona and one from Wisconsin — will work as interpreters for the summer.”

The Woodstock townsite on the west side also falls within the application, as well as 100 feet of ground on either side of the bed. If the National Register grants historical status to the Alpine Tunnel, Rossman hopes to turn the project over to a third-party organization who can apply for state funding.

However, Rossman is only responsible for renovations on the tunnel’s west portal. Any work done on the other side falls into the jurisdiction of Chaffee County, and the Salida Ranger District has no plans for historic preservation, signage or the like. As a matter of fact, the east side doesn’t even belong to the Forest Service.

The old roadbed on the east side from Hancock to the tunnel apex is owned by Jim Treat of Salida, who bought it years ago after the county acquired the land for unpaid back taxes.

“Historic designation is certainly news to me,” Treat said, “but I’d be willing to work with a railroad society or other group to preserve the tunnel and its history.”

Treat doesn’t discourage trespassing along his three miles, “but I can’t be liable if someone gets hurt,” and it’s an easy and scenic hike.

Of the Forest Service work in Gunnison County, the railroad bed that connects the tunnel with Pitkin will see a few improvements to prevent damage. The bed now serves as a winding (and sometimes harrowing) but scenic gravel access to the site.

Perhaps the most overwhelming of Rossman’s responsibilities is clearing the tons of talus and broken beams from the tunnel itself; safety is the key factor.
“The Forest Service hopes to gain entrance into the tunnel so engineers can go in and see if it’s salvageable,” Rossman explained. “If we can reopen the portal and part of the interior, we’ll probably set up some type of barrier that will allow people to safely see the inside of the tunnel.”

Maintaining the tunnel entrance will likely continue as an ongoing challenge because of the frequent rock slides. Rossman predicts the Alpine Tunnel’s restoration could take up to five years.

“Right now, we’re still looking at 80 year’s worth of debris,” Rossman said. “But we have lots of dreams for this place.”

Kim O’Connell-Todd is a free-lance journalist in the Gunnison Country.
Posted by Denver at 12:56 PM No comments:

A few months ago I bid on a number of slides taken on various remains of the C&S.  A number were from the Alpine Tunnel area post-abandonment (I'm guessing they're from the 1950s or 1960s). I'll post these eventually.  However, since the slides did not provide specifics about exact locations I was wondering if I might get some help from others with the ones I cannot identify.  They may or may not be related to the Gunnison extension.

Can you identify the following location? 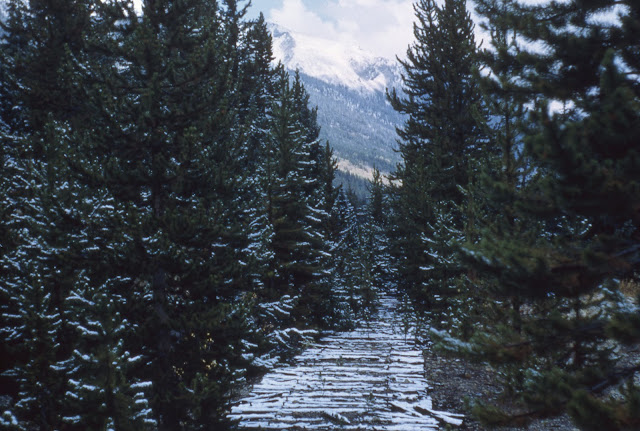 A few months ago I bid on a number of slides taken on various remains of the C&S.  A number were from the Alpine Tunnel area post-abandonment (I'm guessing they're from the 1950s or 1960s). I'll post these eventually.  However, since the slides did not provide specifics about exact locations I was wondering if I might get some help from others with the ones I cannot identify.  They may or may not be related to the Gunnison extension.

Can you identify the following location? 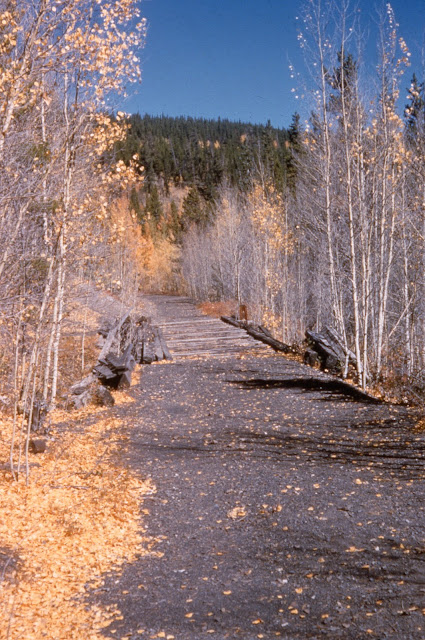 Damage to the Palisades! 3

This is a continuation of the article originally printed in The Pitkin News here. 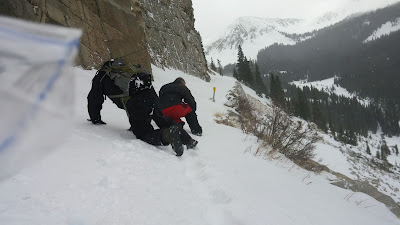 Updated photos below taken by Matt Buchanan, who was accompanied by Pete Olson, & Bill Woodard on March 3/2016. The three snowmobiled up the tunnel road to the Woodstock area where the avalanche covered the road, making travel beyond impossible. They then climbed the debris field left behind by the avalanche to the railroad grade just above the damaged portion of the roadbed. These picture were taken from above the road damage looking downgrade in the direction of Sherrod Loop. Forty to Fifty feet of the Palisade wall suffered extensive damage. Due to snow cover they were unable to determine how much of the road's original width remained. 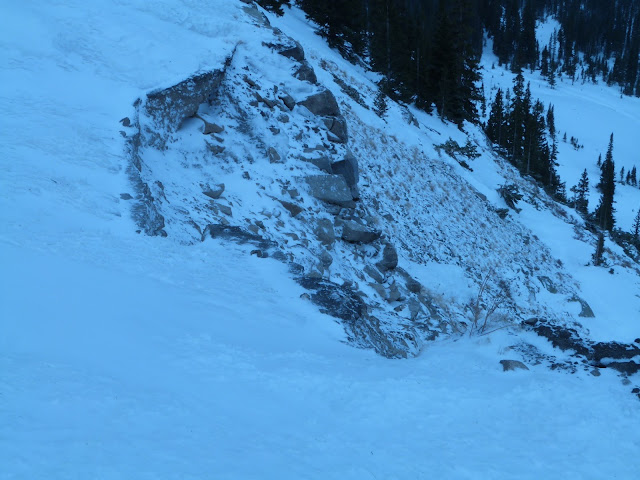 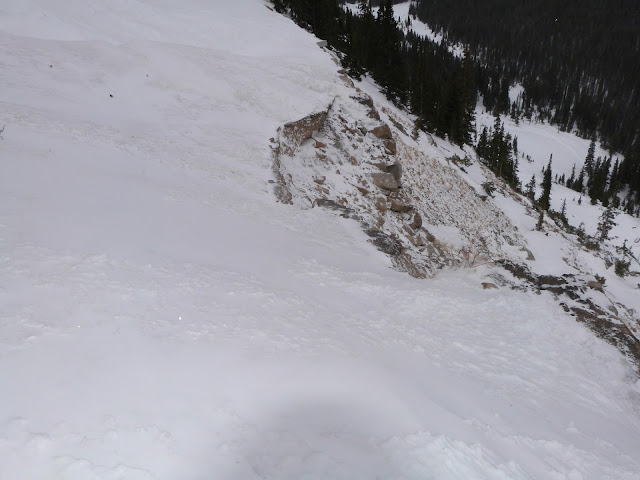 Damage to the Palisades! 2

This article originally appeared in the Pitkin News here. 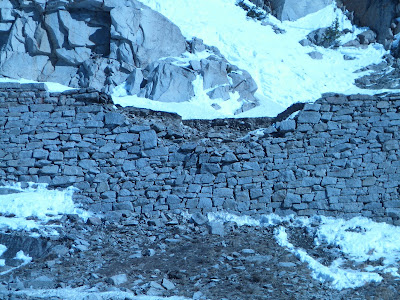 Damage to the Palisades!

The following article from the February 25th, 2016 Gunnison Country Times tells of the winter damage done to the Palisades by an apparent slide.  This is sad news, indeed! 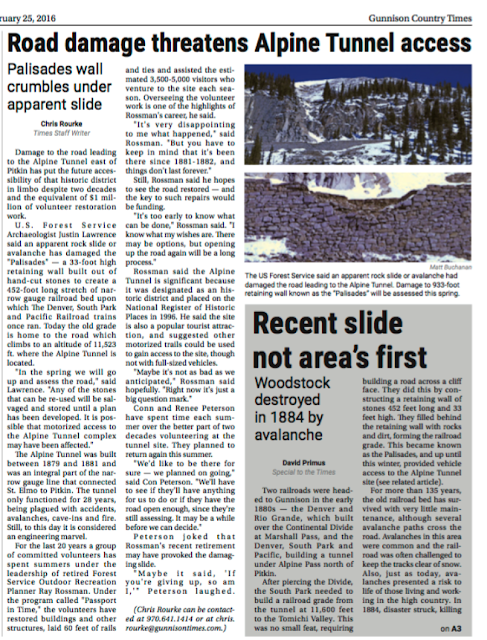 Posted by Denver at 8:17 AM No comments: