A common device used by mystery writers is the use of the red herring.  It’s a false trail that distracts the reader and the sleuth from the real evidence.

As stubborn webs cling to old timbers of the Alpine Tunnel so do red herrings cling to the web called the internet.

Throughout the years, as I have snooped around various websites that reference the tunnel, odd comments arise like the following: “The tunnel caved in from years of erosion.”

Other sites state “the tunnel has been sealed off for safety reasons.”  Even Wikipedia, in its opening paragraph on the tunnel, refers to it as “sealed shut.”

It gets stranger from there as talk of explosives creep up.  According to one jeep club, the “tunnel was closed (the entrances blown up) years ago.”  Another site states, "The entrance to the Tunnel was sealed with dynamite many years ago.”

Did the forest service do this?  They may have had reason to consider it.  There was a time when visitors inside the crumbling tunnel were common.  One visitor to the tunnel in the 1970s remarked that there were up to 25 people inside “including some biker types” when he ventured within.  There was enough concern that rumors spread that the county was going to clear out the debris leading to the west portal and install a gate to keep people out.  So, did they resort to blowing it up?

Thankfully, Ray Rossman set the record straight.  He commented, “There has not been any action using any explosives to seal the tunnel.  All the closure action has been that of mother nature and the slow decay of the granite.  The only action I have
authorized was placing a rather large boulder to prevent entry into the western portal.”

The real culprit in the end, then, is Mother Nature.  Unfortunately, she may be doing more damage than the supposed dynamite might have.

In a later correspondence he remarked, “I have been monitoring the west portal closely and we continue to slowly lose the battle there….During the winter of 2002/2003 it appears that a portion of the tunnel on the western side collapsed.  The natural repose of the tallas debris now goes straight back for about 20' right behind where the upper portion of the stone portal is located.  Very
disheartening.  For those lucky few to have seen the interior, I think they have glimpsed at a piece of history perhaps now gone from our view.”

Alas, the plot thickens, but at least the red herring-colored dynamite can be thrown back into the sea.


Below are various websites with wacky statements about what "happened" to the tunnel:

Says west portal collapsed
Says west portal caved in
Covered by landslides:
Tunnel has been sealed
Tunnel has been sealed.
West sealed BECAUSE East Portal collapsed in 1992
Another.
Tunnel sealed by a cave in & plans to open part of tunnel
question about forest service blowing it up.
both sides blown up “tunnel was closed (the entrances blown up) years ago"

I wish I had a little background on this photo, but I just happened on it somehow on a Facebook page belonging to Jack Sanderson.  It's a stunning post-abandonment shot of the interior of Alpine Tunnel looking toward what appears to be one of the cave-ins with the original South Park rails above water and looking ready to take on an eastbound train of Gunnison coal. 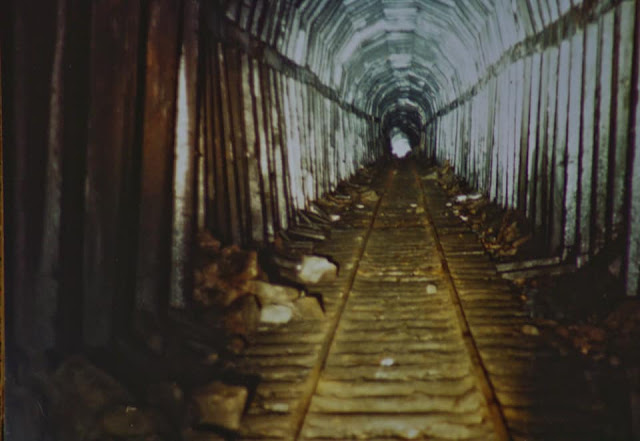 Posted by Denver at 1:39 PM No comments:

While C&S 9 has had a fascinating journey, the three C&S passenger cars inextricably tied to it have had an equally curious expedition.  This video explores the cars' lives from the end of the C&S narrow gauge, their travels to three other states*, and their return to Colorado.


*While the Silver Plume informational sign for Business Car 911 claims that it went to the 1939 New York World's Fair, no photo evidence of this has come to light as far as I know.