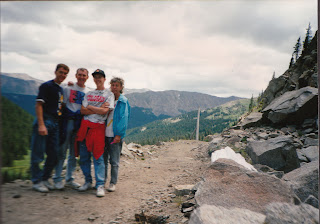 PILGRIMAGE #2: Return to Alpine
My hunger for all things Colorado & Southern did not go unnoticed by my parents. It was but a year or two more before we returned to the Alpine Tunnel in the summer of 1991. This time we planned on visiting the east portal.
So here we were, three years later with our newest victim rental car once again trundling up an old DSP&P grade. This time we were on the road to St. Elmo. St. Elmo was a ghost town and at this time it looked like 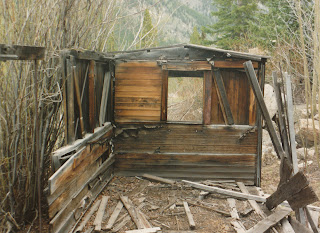 one too because there was not a soul around and a large sign at the end of the main street screamed in its large letters to respect the property. So we did. We turned around and headed back on the grade. I regret our 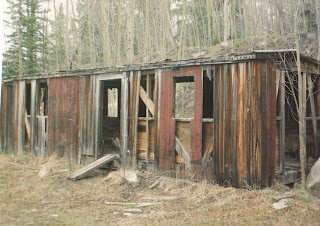 minimal exploration, for when I returned in 2004, unfortunately, nearly the entire east side of the street was destroyed by fire. We did explore the two rotting outfit cars on an old siding at St. Elmo. One was nearly half
gone and the other, while still structurally together was in poor shape. The lettering of “The Colorado Road” was still clearly visible.
Coming back onto the road we experienced something that today is no longer a possibility. Our rental car drove over the rickety trestle at Romely. Our tires had to fit onto long planks laid across the floor of the trestle. My mom was quite frightened, but, I, being a typical teenager, thought it was ‘totally cool.’
We reached the end of the travel-able road at Hancock and, since there were few remains of the town, we began the three-mile trek to east portal. Along the way, we signed our names into a registry. I wrote something like “The Alpine Tunnel Lives!” Remember, I was 17 at the time. I was so delighted at the authenticity of the eastern slope. Unlike most of the grade on the west, this side had not been converted for auto traffic. 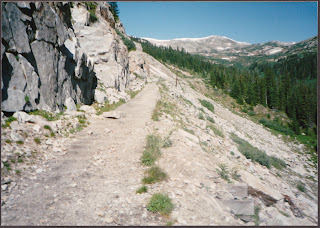 Ties still slept in the grade at various locations, sometimes for significant lengths. The tall pines around us betrayed the reality of the great heights we were climbing. Their veil was lifted abruptly, however, at one point. There the grade jutted out and clung to a steep rocky cliff. Below lay the deep canyon of Chalk Creek, also known as Tunnel Gulch. This was the most magnificent portion of the trip. We wriggled around and climbed over several fallen boulders until we reached the hallowed piercing of the Continental Divide.

As I approached the portal, the snow sheds boards were in a state of disarray, though a few upright beams still stood tall in case a railroad employee decided to resurrect the long dead tunnel. After climbing up some of the debris and dirt that had fallen around the entrance, I found a depression in the pile. There, still visible was a small portion of the top of the arch of the Alpine Tunnel. I crouched down to get a closer look. 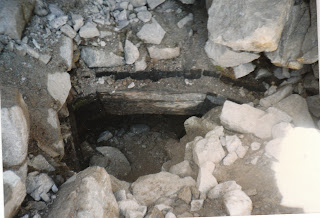 I could see a few more arch tops for about a foot or two. A small pond of water rested below them. I took multiple photos and video footage and made sure to touch the California redwood timbers just to confirm that fact that I was really here, really touching the interior of the Alpine Tunnel! I had made it: Pilgrimage number 2 and, not only that, I had received a vision, a vision of the actual tunnel interior! Little did I realize that when I would return nearly a decade later, I would no longer be able to see these timbers.

We took a short jaunt over Altman Pass following the old trail and got a beautiful view of the valley where Alpine station is nestled. 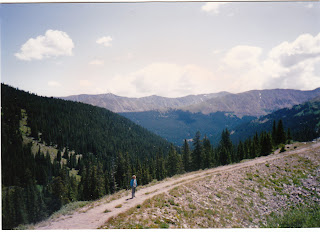 Not much had changed since my last visit. We did find a peculiar critter called a marmot all around though. It looked a little like a fat squirrel that liked to stand up and swivel its belly. My dad took quite a liking to the creatures and they show up not just a few times in our home videos of our adventure. Soon, we headed back toward Hancock, hopped in the car, rolled over Romley trestle one more time (much to the chagrin of my mother again), and left behind pilgrimage number 2.
On a side note, we pulled down the road marked for the town of Fisher. Well, we never found much of anything. The road eventually seemed to dead end so we did a lot of backwards driving until we could turn the car around and off we went.
Posted by Denver at 4:44 PM No comments:

PILGRIMAGES TO ALPINE
I am not a believer in pilgrimages. Not spiritual ones at least. When my faith went from being a tradition to a living, breathing entity in my life early in high school, I rejected a lot of traditions in favor of their reality. At that time, I was perplexed that some people talked of pilgrimages to holy sites, as if it would inspire them. Yet, in another part of my life I learned to understand just how transformational a pilgrimage could be. My devotion to a tiny abandoned tunnel in the mountains of Colorado set aflame a passion that is still going nearly two decades later.

From Heavy Metal to High Iron

Like many teens in the late 1980’s I had two passions: girls and heavy metal. Most other eighth graders would have numbered sports among their secondary passions, but I was unusual in that regard for mine was trains. Maybe it was having a history-minded father, maybe it was the many family walks along the nearby Conrail mainline. Either way, I got hooked. But the ‘hook of hooks’ came at a church rummage sale.
One person’s junk is another’s treasure, they say and such was my case. Our church, St. Mark Lutheran, had a yearly rummage sale and I always scoured it for model trains. This time, however, I found a huge stack of train magazines on a table in the back of the gym and quickly snatched them up. I was particularly curious about some magazine titles I wasn’t aware existed. One of these was the National Railway Historical Society magazine. As destiny would have it, I stumbled upon an article about a group of rail fans that visited the site of a tunnel that had been abandoned since 1910. The image of the inside of the tunnel is still etched in my mind. I was intrigued that somewhere there was an old tunnel with its rails still in the bore as if it was desperately trying to defy the bell that long ago tolled for its demised. And so it began.
At the library, the Cleveland library, mind you, I located both The Historic Alpine Tunnel and The Denver, South Park & Pacific. What odd books to find in Ohio of all places! I devoured their contents and found myself lured into the fabled history of this railroad called the Colorado & Southern and its struggle against the elements. I was so hooked that I worked out a scheme to earn money for doing chores at home that would earn me enough money to purchase a $250 copy of DSP&P from a rare book dealer. My mom declined (good thing, as I found it on ebay for $70.00 a few years ago!).
Though my carefully calculated scheme to acquire the DSP&P book failed, my parents recognized my growing devotion to this little railroad, and in the early months of 1989 they told me something that thrilled me to the core: we were going to spend two weeks in Colorado this summer and make a stop at The Alpine Tunnel. Pilgrimage #1!
Posted by Denver at 4:19 AM 4 comments: