In the summer of 2018, my family and I visited Como.  It was the first time my wife and I had been back since the summer of 2004.  While we unfortunately didn't come on a day when Klondike Kate was steamed up, it was nonetheless astonishing to see how different the entire place was 14 years later.

In 2004, the depot was a rotting shell.  Today it is a lovely building, ready to receive a train from Denver.  Back in '04 I had no access to the roundhouse.  In 2018, Jeff Badger graciously welcomed us inside to look all around.  What fun!

This video is a mixture of before-and-afters photos and some before-and-after-and-afters, as well as some other photos and video of the site.  If you've never been to the roundhouse, or it has been a while, you'll get to see what's going on inside and some of the various items that are being restored.

In just the year since we visited in 2018, more rolling stock has arrived and more track has been laid.  These are exciting times for lovers of the DSP&P/C&S! 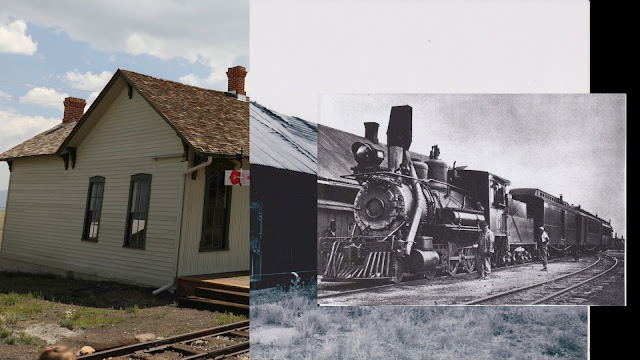 Posted by Denver at 7:43 PM No comments:

LAST SUMMER OUR STAFF PHOTOGRAPHER PUFFED his way to Alpine Tunnel, where no trains have puffed since 1910 on the South Park line.  Pictures include the right of way, the debris choked portals, boarding house and depot, and a general view of entire layout from summit of Alpine pass.  Six 616 size prints 50c; 13 for $1; 8 x 10 glossy enlargements at 3 for $1.50.  Have nine varieties of the enlargements.

The string of weather-beaten ex-C&S stock cars at Ridgway have been dismantling [sic] during the winter.

It doesn’t seem to be generally known but the narrow gauge bogie type engine thot to have been from the South Park line, and parked on the campus at Ames, Iowa was cut up for scrap during World War II.

One each of the ex-Colorado & Southern box cars and stock cars are coming to be part of the MB&W [Mount Blanca & Western-the made-up railroad name used at the early Colorado Railroad Museum] roster … we are considering lettering them for the South Park.

The names with faked dates carved in the rocks of the Palisades near Alpine Tunnel have been removed we learn by a “committee” indignant at such phoney goings on, a stick and a half of dynamite being employed along with chisels.

From a section regarding reasons being given for abandonment of the ex-C&S Gunnison lines:

One item says “in the fall of 1952 however a stock train was operated over the Baldwin Branch from Wylie to Gunnison,…but on that occasion a bridge collapsed and had to be rebuilt before the livestock could be hauled to destination.”  Our reporter was present on that occasion and noted no bridge “collapsed,” only that a rotten cribbing timber had let one end of the bridge settle slightly.  A bridge gang next day replaced it.  Our reporter saw no signs of any bridge being “rebuilt.”

The “mudhens” have been seen infrequently the last ten years on [D&RGW]main line, and the 470s vanished from passenger service almost entirely after the government took seven of them to Alaska in 1942.  Took note of this because C&S 69 and 70 were also sent up to Alaska a year later.

“Mac” Poor has loaned a builder’s plate from Colorado & Southern engine No. 75.