The Mountain Mail published a two-part article titled "Ghosts of Alpine Tunnel" back in 2019.  Part 1 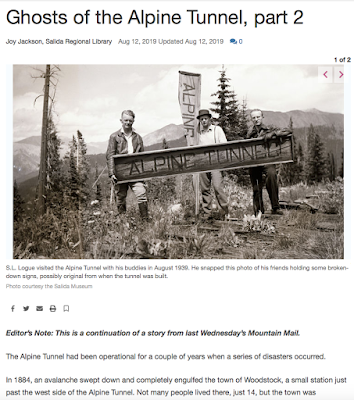 requires a subscription so I don't know what was included in that part.  However, the second part discusses several misfortunes in and near the tunnel such as the destruction of the town of Woodstock in a snowslide and the asphyxiation of the four workers in the tunnel while working to reopen the line.

As a side note, the Part 2 article includes two great Les Logue photos of himself and friends in August 1939 carrying the Alpine Tunnel station signs home via the east side of the pass (one or both of these ended up a the Colorado Railroad Museum).  There is also a great 1939 photo of the still-visible west portal arch of the tunnel.

The article also contains two stories I had not heard before. The first mentions a situation in early June 1895 during the work to reopen the tunnel in which a locomotive backed cars into the tunnel when "the front car became detached and raced backwards down the incline.  Thirteen men leapt from the speeding cars; two were killed."

The tunnel at this point was still blocked to through traffic.  The same article mentions the well-documented tragedy "Later that June [when] four workers had entered in from the east side to begin clearing the blocked tunnel."  If the tunnel was blocked, then in early June, the racing cars in the early June situation must have descended into a dead-end: the blocked up tunnel.  Very possible, though, I have not heard of it before.

The second unheard of (by me) story has more questionable content.  The story tells of an 1885 passenger train that came out of Alpine Tunnel's east portal into a snow drift and got stock.  The article then quotes a passenger by the name of Rohlfing who went to get help for the stranded train by walking all the way to...Buena Vista!  He explains how he trudged through deep snow drifts and even blizzards, fell through a trestle into the cold water below and sprained his ankle, and finally, a day later made it to Buena Vista, a distance of roughly 60 miles (the article claims 40).  As he made his slow journey he found "every station house along the route was closed."

Several problems present themselves in this story:

1. Why walk 60 miles to Buena Vista, when the nearest warm place was less then a mile away either back through the tunnel or over the pass to Alpine Tunnel station where the entire station complex existed with at least the section crew and telegraph operator, if not more, to help?  A nice warm engine house, boarding house, and telegraph office awaited.

2. Wouldn't someone on the passenger train suggested better options?  Even if he was the only passenger on the train, which is doubtful, the engine crew and conductor could have gone for help or at least suggested to go back to the station instead of walking east.

3. Next, even if he headed out on his own, without informing anyone, and made the foolish choice to walk east, away from the Alpine Tunnel station, why didn't he find shelter at any number of towns along that route?  To name just a few, he would have passed Hancock (just 3 miles from his location), Romley (and any number of active mine complexes in the area), St. Elmo, Fisher, Mt. Princeton Hot Springs, and Nathrop.  Some of these towns have had up and down populations, no doubt, but in the mid 1880s, several of them were surely populated.

4. Finally, why would "every station house along the route [be] closed"?  The route over Alpine Pass did indeed shut down for the winter months quite often during its life.  However, if a passenger train is running, presumably a scheduled one, then surely freight was also active.  Why would all the stations be closed up?

There are many tall tales about this route and I'd venture to say this story is one of them.  If anyone has any insights that I am missing, please chime in!