While many are familiar with the turntable outside the roundhouse in Como, not as many are aware of the wye that existed outside of town.  As eastbound trains headed past the Como depot and the hotel, the mainline to Denver split from the line towards Boreas Pass and curved sharply (seemingly parallel, albeit a good distance from the Gunnison main).  Then, close to the present highway, the right-of-way curves again to head across South Park.  It is at this curve that the wye once existed.  It was originally know as the King Wye Branch-a branch leading to the King Coal mine.

One talked-of plan of the track work in Como is to lay track all the way to the wye, all of which can be done without crossing the highway.

Below is a great video of drone footage following the line from the depot, out to the wye, and a little beyond.

For those who have been following the news on the work to eventually repair the rock walls at the Palisades on the route toward the west portal of Alpine Tunnel, the following is good news of progress.  One of the early steps was to at least provide motorized access via Williams Pass.  This bypasses the rock wall damage by using the old route from Hancock where it meets the road bed just above the Palisades.

It requires serious jeep skills and is only open for one month a year, but it is still great to see vehicles reaching the station complex.  Below is a video showing a jeep trip over the pass and to the tunnel.

The following is an explanation from Justin Kearns who is doing great work to bring a full restoration of the Palisade rock wall and the road bed:

"The route over Williams is indeed passable for the first time this year in a long, long time.  This is because the CORE group out of Buena Vista adopted & restored Williams Pass last summer and removed various rockfalls from the grade above the Palisade wall this summer.  Without their help it would not be possible.  That having been said, Williams Pass is typically only open for the month of August.  The marshy area above treeline melts very late in the season.  So it's already closed for this year.  If you want to attempt it next summer I suggest targeting a mid-August timeframe."

I took a shot at narrating I made following the post-abandonment life of C&S 2-8-0 No. 71, now in display in Central City, Colorado.  Unfortunately, I lack a radio-worthy voice!

Posted by Denver at 4:06 PM No comments:

"A severe snowstorm is raging in the mountains."

These are the desperate words that began the Wednesday, January 9th, 1901 article in The Denver Times.  In these mountains, the Sawatch Range, one of the most epic tales of survival on the South Park took to the stage. 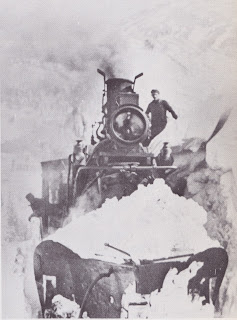 A Buena Vista-bound mixed train was making its way through the great Alpine bore when relentless snowfall blocked its way out of the eastern portal.  The now-hidden train could only turn back, but, to the crew's dismay, its retreat to the rear also became blocked by drifts.  The train and its helper engine sat helplessly in the ventless tunnel.

Visions of the four men who died of smoke inhalation while working in the tunnel six years previous must have haunted the thoughts of the panicked crew and passengers.  Desperation seems to have motivated some to action.  According to The Times "several of [the passengers] have made attempts to fight their way through the drifts."

However, it turned out that The Times was wrong about the situation.  It was worse, much worse than they thought.

The Denver Post reported that the train was not stuck in the tunnel at all.  In fact, it had made it through and emerged into the raging snowstorm on the Atlantic side.  As blinding snow pelted the combination coach's windows, it plowed on along the steep mountainside for a mile when "a huge snow slide came down the mountain completely burying the train which remained on the track."

This incident seemed a foreshadowing of the two Great Northern trains nine years later that were struck by an avalanche close to the base of Windy Mountain in Washington.  Both trains, though, were hurtled off the tracks and buried beneath up to 70 feet of snow.  96 people would lose their lives that day.

On the east side of Altman Pass, thankfully, none had yet perished.  Whether or not it would remain so was still a daunting question.

The crew and passengers of mixed-train No. 94 had been entombed for 36 hours in this precarious 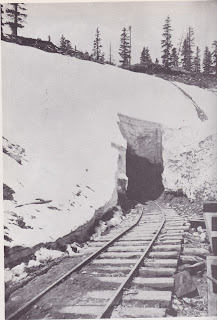 predicament.  The following day (Thursday), in The Post, an article revealed new details.  The engineer, fearing a boiler explosion, had let the fire die in his engine.  The crew, then, took the meager remains of coal back to the coach to maintain the coal stove there and keep the stranded passengers from freezing.

The Post noted that roughly ten passengers were aboard the train, "including two women and one child" and that their provisions were low.  As temperatures dipped and stomachs began to growl, hope for rescue must have been fleeting, for outside their coach windows the storm raged on like an angry giant intent on its destruction.

The C&S had a second emergency when the rescue train with a rotary was blocked by a sudden rock and snowfall a few miles from Mt. Princeton.  Contact seems to have been lost with this train as well.  Later in the day it was reported that "nothing has been seen or heard from...any person connected with the rescuing party."

Finally, after all the fear and trepidation elicited by these reports, The Denver Republican got wind of the all the facts, including the fate of those ten passengers, the crew of the train, and the lost rescue party.  The truth was as shocking as the story itself: The stranded train never existed.

C&S officials adamantly discredited the wild stories about snowbound trains near Alpine.  President Trumbull himself made a statement that "no passenger trains were caught in snow banks."  Apparently one freight train was unable to enter the west portal due to snow and subsequently returned to Gunnison.

The Colorado Road's superintendent Dyer had some harsh comments for the writers of The Denver Post and The Denver Times.  He stated, "if those who claimed such had stopped to think a moment, they would have realized [that] a snow slide does not occur until after a heavy fall of snow followed by a thaw, which loosens the snow when it slides down.  A cold snow or a first snow does not slide."

No avalanche, no train, no rescue party, no starving, stranded passengers.  They say there are some ghosts up at Alpine Tunnel, but these ones appear to have been a mirage, albeit ones that sold juicy newspapers!

Part 4 of this series follows the DSP&P/C&S route from the large rock wall to one of the few remaining telegraph poles along the line.  Numerous rock cribbing walls on the uphill side, most of which are still intact over a century after their construction, are pointed out as well as one stone culvert site and one wooden culvert site.

Gunnison Memories and Then Some by Tom and Denise Klinger

Posted by Denver at 8:49 PM No comments: 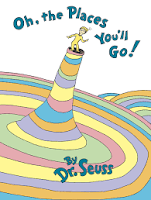 The last book by Dr. Seuss published during his lifetime was Oh, the Places You'll Go.  It's a fitting title for the life of C&S No. 9

Today, C&S mogul No. 9 is on display in Breckenridge on a stretch of track on the original right-of-way of the South Park Line.  After use on a scrap train in June 1938, she was displayed at the 1939 World's Fair, was stored in the CB&Q shops in Illinois, was then run at the 1948 Chicago Railroad Fair, returned to Aurora, and then leased to the Black Hills Central in South Dakota where the engine and her train was on display.  In 1988 the Burlington Northern gave her to Colorado.  She spent many years at the Georgetown Loop, even running for a short season in 2006, until she was put in her most recent setting, Breckenridge.

What many don't know are the many places she came close to being.  While none of these panned out, they were in consideration at one point. 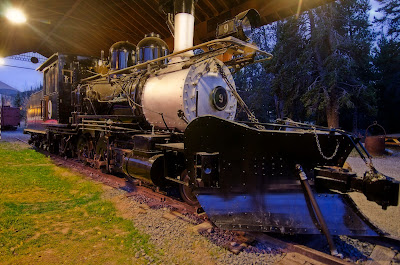 From at least January to March of 1938, the plan for the New York World's Fair was to display C&S mogul No. 6.  By December, something changed and No. 9 was substituted.  Incidentally No, 6 was scrapped that very month.

In 1940, Vice President and General Manager of the C&S Robert Rice sought to give No. 9 to Central City as they were actively requesting a display engine.  In the end No. 71 was given this honor.

J.W. Cooper responded to Rice by saying that the Central City option "might be desirable" but that "might preclude the use of the locomotive for display at fairs or other places if requests were received."

There was "some talk" of keeping railroad equipment for the World's Fair and putting them on permanent exhibit in New York.

5. The Chicago Museum of Science and Industry

The president of the CB&Q wrote that "serious consideration is being given to placing the old narrow gauge engine and cars" in the museum in Chicago.

Apparently the CB&Q had offered an engine for display (presumably No. 9, though it may have been No. 6) to Denver, but the city wasn't interested.

A man named Spence Penrose also wanted one of the C&S narrow gauge engines for display at the
Broadmoor Hotel in Colorado Springs, but he died before the engine was procured.

If Dr. Seuss could write a book for this post I suppose it would be called Oh, the Places You Didn't Go.

The above info is from Daniel W. Edwards' A Documentary of the South Park Line: Vol. 6 from the chapter entitled "South Park Engines in New York and Central City."

Posted by Denver at 6:46 PM No comments:

I'm happy to report some more updates on this effort! Firstly with respect to the previously announced 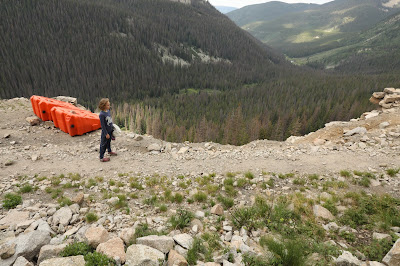 $90k grant for rock scaling, we are putting a RFP out now and meeting with perspective contractors in 3 weeks. This work will be awarded this year and completed next year - summer of 2022. After this is done it will be safe to commence repair work.

With respect to new funding we have officially been awarded a $50k planning grant under the GAOA! This money will be awarded for FY22 and will pay for all of the remaining engineering and other planning work that needs to be completed before commencing the repair itself. We are also hopeful that this initial planning grant will precede a much larger implementation grant for FY23. We have targeted the GAOA as the potential largest source of funds for the Palisade repair so it's great to get some money coming from them.

Additionally the NFF (National Forest Foundation) has received a $3M endowment from Polaris and we've been told this project will receive some of those funds.

Finally we are still preparing our re-application for $200k to the SHF (State Historical Fund). The timing of this has changed a little with it being pushed back to August 1st instead of July 1st. I will let everyone know when the letter writing period opens for that important activity.

Thanks everyone for your continued interest and support of this effort!

Posted by Denver at 5:56 AM No comments: